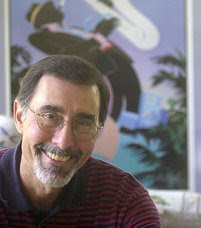 On September 8, after you've rested from your long weekend, come attend our meeting on Tuesday and hear award-winning author Cic DiGenti speak on the all important first page.

GREAT BEGINNINGS: THAT ALL-IMPORTANT FIRST PAGE
Let’s face it, we have short attention spans. If the author doesn’t catch and hold the reader’s attention with the first line, first paragraph and first page, they might look for another book. Author Vic DiGenti leads us through a fast-paced, upbeat session looking at the keys to Great Beginnings, and tells us why it’s so important to grab the reader in the beginning. Bring copies of your own first page for feedback from the group.

Victor DiGenti spent more than thirty-five years working in public broadcasting as a director, public affairs producer, head of a two-station corporate communications department, and was responsible for special events, including producing the acclaimed Jacksonville Jazz Festival for eight years. During that time, he won national, regional and local awards, produced documentaries, and was a freelance writer. Prior to that, he attended the University of Florida, worked at a CBS affiliate, and as an announcer with a top 40 radio station.
After his retirement, Vic turned to his first love—writing. He found inspiration in his household of feline critters and wrote three adventure/fantasies with a feline protagonist. His first two novels —Windrusher and Windrusher and the Cave of Tho-hoth (Ocean Publishing)— have won multiple awards and attracted readers of all ages. His third in the series, Windrusher and the Trail of Fire, was released in August of 2008.

Vic is a regional director of the Florida Writers Association,President of the Friends of the Library–Ponte Vedra Beach, and a member of the Rotary Club of Ponte Vedra Beach. His unpublished manuscript, Matanzas Bay, a mystery/suspense novel set in St. Augustine, Florida, won the 2007 Josiah W. Bancroft, Sr. Award

We are a group of published and unpublished writers, who get together each month to learn about current trends and share information on the writing craft. The FWA recognizes that you may want to explore your talents through different formats and that's why we are not a genre-specific writers' organization and offer monthly meetings that reflect a variety of interests.

You do not need to be a FWA member to begin attending our monthly meetings, but after you've come to a few you are encouraged to sign up and enjoy the many discounts and benefits of membership in this energetic organization. And you are welcome to visit any of the statewide FWA local groups at any time.

Our monthly guest speakers offer you experience and advice from diverse backgrounds and insight into successful publication strategies for your own writing project. (See our current calendar of upcoming speaker topics below.)

If you have any questions, please contact our group leader Gregg T Golson: gtgolson@comcast.net We look forward to meeting you soon!

We meet in conference room "A," in the alcove to your right as you enter the building. Food and non-alcoholic beverages are permitted for the busy after-work crowd.

Florida Sisters in Crime (SinC) meets at 10:30 a.m. on the first Saturday of the month at the Southeast Regional Library; 10599 Deerwood Park Blvd http://www.geocities.com/flasinc/ The SinC Writers' Critique Group meets immediately following the monthly meeting at 12:00 p.m. If you plan to attend the Critique Group, please email flasinc@yahoo.com 24 hours prior to the meeting.

Florida Writers Association (FWA) Amelia Island meets on the third Tuesday of the month at 6:00 p.m. at the Florida House Inn, 31 S. Fourth Street, Fernandina Beach. Contact Group Leader Maggie de Vries at maggie1948@yahoo.com for details about their next meeting.

Society of Children's Book Writers and Illustrators (SCBWI) Jacksonville meets irregularly on the third Saturday of every month from 1-3 p.m. at the Southeast Regional Library, 10599 Deerwood Park Blvd. For more information about upcoming meeting, contact Janet Walter at jgwalter@comcast.net or http://home.comcast.net/~floridaec12/scbwijax.html


Deadpaper - Local poets and writers read their work at 7 p.m. on the last Friday of every month at Chamblin Uptown, 215 Laura St. http://www.deadpaper.org/info.htm

Poetspeak - Poetspeak features spoken-word at 9 p.m. on the first and third Monday of every month at Backstreets Coffeehouse, 61 Spanish St., St. Augustine. Admission is $2. 827-0990.

Unheard Words - Open-mic poetry is held from 8-11 p.m. every second and fourth Tuesday of the month at Tamerry's Sports Club, 10696 Lem Turner Road. Admission is $3 for students, $5 for general audiences. Poets are admitted free. 722-1647.

The Association of Authors’ Representatives
Here’s a helpful link for finding a legitimate agent for your manuscript: http://www.aar-online.org/mc/page.do?sitePageId=9693&orgId=aar

Query Letter Know How
Here’s an agent’s web link that provides information on writing an effective query letter and tips about how to get an agent to represent you: http://www.nelsonagency.com/faq.html#6

Wordsmith.org
Build your vocabulary, one word, one day at a time using this free word-a-day email service: http://wordsmith.org/awad/index.html